The Trend for Dog Bark Mitzvahs

What are Bark Mitzvahs? 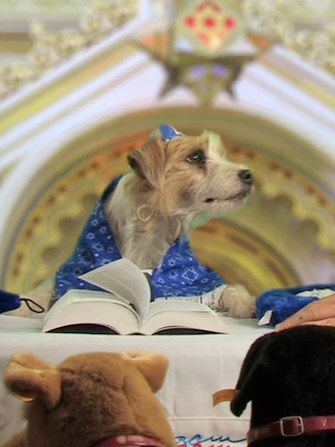 Everybody knows about the Jewish traditions of Bar Mitzvah and Bat Mitzvah, but not many know that they can have a coming of age function for their dogs as well. That’s right… a Bark Mitzvah, a coming of age observance for dogs, is growing more and more popular these days. The trend caught attention when Hollywood Actor Jason Biggs and his wife performed the ceremony for their dog Teets. The dog Bar Mitzvah was completed with the 13-year old received the blessings of Baruch atah Adonai and challah at the Sinai temple in Westwood, CA. In the same way, most people arrange a Mitzvah for their dog simply for fun. However, there are some who think that there is a spiritual side to it, very similar to the Catholic ritual of blessing pets. Whatever the reason, a Bark Mitzvah has become a fun and innovative activity that many people identify with today.

A dog’s rite of passage cannot be compared with a human’s as they mature differently. But for pet lovers, it is an occasion to cherish their pet’s presence in their lives nonetheless. Giving a religious name to it is just a personal decision for many.  Many people defend it by saying that their dog has a right to religion as well. As a trend, it is mostly Reform and Conservative Jews who celebrate this event today.

The trend finds its origin among the followers of Saint Francis of Assisi, the patron saint for pets. Jewish acceptance of similar customs is evident from the rabbis who willingly agree to perform the holy rites for pet owners who simply love their dogs. The earliest record of a Bar Mitzvah goes as far back as 1958, where a couple celebrated the Bark Mitzvah of their cocker spaniel who was called the Duke of Windsor or Windy for short. As the name Bark Mitzvah was mentioned on the invitations, the coinage of the term is usually attributed to her, according to the Beverly Hills Courier. While some of the initial Mitzvahs were looked down upon, pet owners have never been discouraged from hosting them. And many rabbis are slowly starting to actively participate in the events to give their blessings to dogs.

As far as dog lovers are concerned, a Bark Mitzvah cannot be completed with just one dog around. Everybody loves a party and inviting friends and their dogs is the best way to have one. Many pup owners swear by the dance of Horah, customized for their pet’s Mitzvah. Whereas you hold human hands in the traditional dance, you could hold your pup’s hands or carry him or her in a sling to help him enjoy the dance. Simply holding him as you dance is also a great idea. A Bark Mitzvah is also incomplete without a gift basket. Just like in the typical ceremony for boys and girls, pets get pampered to the core on this day. Other ideas to spice up the event include getting color coordinated outfits, making or ordering bone-shaped Mitzvah cakes and calling a professional photographer to capture the whole memory. Pet caretakers find this growing trend a really good opportunity to make business through customised merchandise for dogs. Dog salon owners also arrange Bark Mitzvah special makeovers for spoiling pets to the core for this celebratory occasion.

Bark Mitzvahs have also made dog-sized tallit (a fringed garment) and yarmulkes (a skullcap for dogs) very popular. Since dogs are much smaller in size (other than Great Danes and Alsatians), pet owners need to get the Mitzvah outfits stitched for them. Nowadays some pet shops offer to stitch these custom made yarmulkes for dogs. In many homes, guests are gifted satin yarmulkes with the hosts’ dog’s name and his Mitzvah date printed on it. Some dog owners also take help from professionals to make customised Star of David charms, bibs or hoodies for them. In schools, Bark Mitzvahs are typically more official, with a rabbi initiating the ceremony. After a prayer for the dogs present at the ceremony, the dog owner is presented a certificate of the Mitzvah, which again is made by professionals.

A really good thing about Bark Mitzvahs is that they serve as an excellent occasion for fundraising activities.  Some of the participating temples have also been known to raise pet awareness campaigns through them. In fact many people request their guests to bring their gifts in the form of donations to a charity.

With all the popularity that Bark Mitzvahs are generating, other pets are also being considered for Mitzvahs. People who have been to these Mitzvahs say that they are an excellent way to bring families and pets together. A 2015 mockumentary–style short film titled Bark Mitzvah also features this new trend. The point is to remind people that pets are also spiritual beings. Even though many disagree on this point, people are still ready to go out of their way to shower their love on their pets because they honestly believe that their pets have given them a lot of love and brought major changes to their lives.