People often mistakenly use the Hebrew terms “Bar” and “Bat” together. Being Jewish (Babylonian) Aramaic terms, they stand for “son” and “daughter” respectively. “Mitzvah” on the other hand, stands for either “law” or “commandment”.  A combination of both terms means son and daughter of commandment, respectively. As evident in most countries of the world today, children are given certain freedoms or welcomed to adulthood at certain ages. This is exactly what Bar-mitzvah and Bat-mitzvah represent in the Hebrew or Jewish culture.  For the Jewish boys, they are initiated into adulthood at the age of 13 while girls are celebrated at the age of 12.

Before the celebration and ritual, parents are usually held accountable and responsible for the actions of their kids until they attain these ages when they can then be considered as independent and also treated as such. In a traditional sense, parents, especially the father of the child, appreciates God for being exonerated from the punishment of any sin committed by the child while the child takes responsibility in performing all Jewish ritual traditions, ethics, and laws. In addition, he gains full participation in all aspects of the community lifestyle. With respect to the Atonement Day, the Bar and Bat mitzvahs are free to join in the normal fast, since these ages also coincide with puberty.

Going by the ancient celebration, the practice is still held among non-Orthodox Jews. It is an event accompanied by real festivity, where the celebrant (including girls) delivers a previously learned oration or recitation before all invited guests, who in turn shower her with different gifts. The rabbi, also known as the teacher, blesses her, after which there is a special time given for a speech or an address. The most fascinating aspect of this celebration is seudat Mitzvah, involving wining and dining with all members of the family, friends and other well-wishers. The celebration can be done either at home, on a trip, or in any event centers, according to the taste of celebrants’ parents.

In New Jersey, despite the tradition and religious background surrounding this ceremony, various families have taken to different levels in giving their kids grand celebrations through various event hosts like Gemini Productions, an award winning DJ and wedding Company, which specializes in entertainment and video production. Gemini continues to provide superb entertainment and they give Bar and Bat-Mitzvahs’ celebrants the best event treatment in New Jersey.

This celebration is held for sons and daughters at these ages to signify adulthood in the Jewish community. This is also associated with some responsibilities attached with attaining adulthood. These include: being eligible to read or recite from the Torah, taking moral responsibility for personal actions, leading a minyan, ability to own personal property, ability to get married legally, ability to adhere to the Torah’s 613 principles, ability to keep the halakha and the ability to stand as witness and testify in any rabbinical court.

Gemini Productions specializes in bar mitzvah DJs and bat mitzvah DJs in NJ and NY.
Please call us for more information at 973-686-1003

If you’re a dog lover, why not throw a Bark Mitzvah? 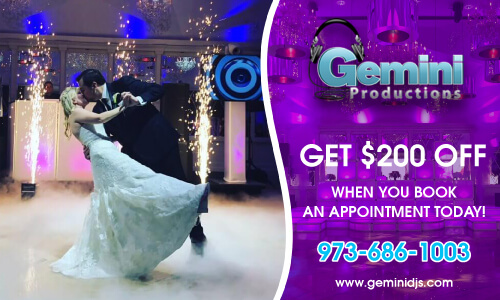